"For me, one of the major reasons to move beyond just the planting of trees was that I have tendency to look at the causes of a problem. We often preoccupy ourselves with the symptoms, whereas if we went to the root cause of the problems, we would be able to overcome the problems once and for all."   ~  Wangari Maathai  (Founder of the Green Belt Movement, author, environmentalist, civil society & women's rights activist,  former Kenyan parliamentarian, & 2004 Nobel Peace Laureate) 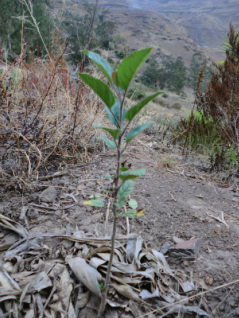 While blessed with one of the highest biodiversity indices, Ecuador also has one of the world’s highest rates of deforestation estimated at over 300,000 hectares (3%) per year. In the interandean basin, native vegetation has been practically eliminated since colonial times, replaced by crops, pasture, towns and cities, and exotic tree (eucalyptus and pine) plantations. This region suffers serious soil erosion problems and today only about 1 - 2% of its original forest cover remains, mainly at inaccessible high-altitude locations above 3400 meters elevation. Only about 5% remain (mainly within the Cotacachi-Cayapas reserves) of the rich forests of the coastal region, most of which have been destroyed in the last 50 years by logging, agroindustrial monocultures (banana, cacao, coffee, African palm) and colonization. In the province of Esmeraldas (in northwest Ecuador), the last unprotected old-growth forests on the coast are now being liquidated by the timber industry and cleared for huge plantations (thousands of hectares) of African palm which are currently responsible for the fastest deforestation rate in South America.

Over 70% of the coastal mangroves have been eliminated by the shrimp industry, which have also moved into Esmeraldas threatening the Earth’s tallest and best conserved mangrove ecosystem and the traditional fishing communities which depend upon it for their subsistence. Since the early 1970’s about 30% of the Ecuadorian Amazon has been deforested and/or polluted and entire indigenous cultures, such as the Cofan and Huaorani, have been placed in danger of extinction as a result of the oil industry and accelerated colonization facilitated by the oil roads. In addition to all this, land traffickers and colonists are steadily removing the megadiverse forests of the Andean outer slopes and the menace of large-scale mining currently looms on the horizon. As a result, the Andes-Amazon and Andes-Choco of Ecuador are among the most threatened pristine forest ecosystems on the planet .
(2001 research http://www.rainforestinfo.org.au/projects/jefferson.htm)

Traditionally, command and control measures have been applied for forestry control, but on September 2008 the Ministry of Environment launched its Socio Bosque Program (PSB). Socio Bosque is the implementation of an incentive-based policy that provides an economic incentive to land owners who voluntarily decide to protect their forest. Socio Bosque aims at preserving native forests and other native ecosystems and thereby protecting their enormous ecological, economic, and cultural values. Secondly, it aims at a significant reduction of deforestation and its associated emissions of greenhouse gases (GHG). Finally, it aims at increasing human well being by providing financial resources to the poorest people in rural areas.

The ministry of Environment gives away native trees to landowners interested in reforesting. The owners land is evaluated for proper tree forestation, based on land size and trees native to the area.

We work in areas where the need for reforestation is recognized by the local population; our reforestation will have a threefold benefit for the environment;

1. Trees will absorb carbon dioxide emissions and help the atmosphere.

3. As the forests establish, the food chain will extend, increasing the diversity of flora and fauna.

The trees we plant are not exotic timber woods but native tree species found in the area that have as a primary function the provision of habitat for bird life and animals. Some of these species are on the near extinct list for the highlands, which covers most of Ecuador. We began our project planting near extinct Spanish cedar's (as seen in the picture).

Continual data collection from the sites provides increased understanding of forest development and will allow the incorporation of refined techniques such as:

2. Combining shrubs with slow growing tree species to provide warm microclimates to help protect them from frosts due to the higher elevation.

We also plant native species as these are adapted to the local ecosystem. Native species are non-damaging and will actually help the ecosystem by stimulating biodiversity, and help the reintroduction of other species of flora and fauna. Whereas, at present, Ecuador's soil in the highlands in particular, has created the conditions for eucalyptus trees to be an invasive species. The eucalyptus have damaged local ecosystems with their excessive demands on the water table leading to reduced plant diversity and in extreme cases, desertification.

As well as these efforts, we plan on teaching in the local schools the value of keeping forests intact and all the benefits trees bring to quality of life on earth.

All our updates on our reforestation goals and food forest are updated regularly on our blog. Please also visit our Tree Donation page for details on how you can help us be part of re-planting paradise.