Local places & events of interest are in bold... 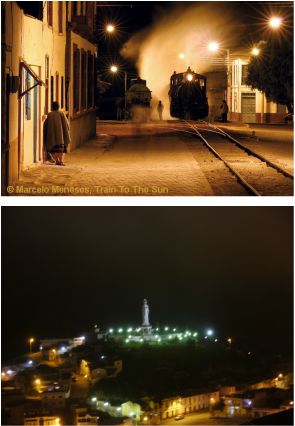 Alausi at night, train & San Pedro monument
Our location is in central Ecuador. We are in the small city of Alausí, province of Chimborazo at an altitude of 2600 meters, (7600 ft. above sea level) . During the Spanish conquest of Ecuador, the city was named San Pedro de Alausí, giving the city the name of the saint of the day, St. Peter. Alausi connects (via bus or car), to the two major and most populated cities in Ecuador. It is the point of connection between the Coast and the Highlands (Sierra). We are 2.5 -3 hours northeast of Guayaquil International airport (Simón Bolivar), on the coast, and ~ 4.5 hours southwest of Quito's international airport (Mariscal Antonio José de Sucre).  Alausí is on the national railway line, it goes all the way to the famed Devils Nose (Nariz del diablo). This has been Alausi's main tourist attraction.

Alausi is a typical small city in the Ecuadorian Central Andes highlands. The pace of life here is slow and relatively peaceful, especially on non-train days, allowing visitors the opportunity to wander and get a good feel for how people here live. The towns historical center maintains its architecture from the 19th century which includes houses with decorative balconies. It is preferable to visit on Sundays, to experience the large outdoor market in the main plaza. You can get a good sense of Alausí in about a 2 hour walk. If the altitude isn’t affecting you too much, a great view of the city can be had from the small park on a hill (loma de Lluglli) overlooking Alausi, dedicated to San Pedro (St. Peter). This monument towers over Alausi.

The railroad route from Alausi onwards through the Devil’s Nose was built in 1901, it is beautiful, passing through areas of desolate and remote countryside, in addition to sections that are made up largely of farmland. The Devil’s Nose Train is probably one of the most famous and infamous tourist sites in Ecuador. Many Jamaican slaves and indigenous died during the railway construction, when you take the ride you'll understand why. The terrain is precarious, at times the train is so close to the side of a mountain that if you stick your hand outside the train car, you’ll lose it. La Nariz del Diablo, or, the “Devil’s Nose” is the hill through which the train’s rails descend. The hill is almost vertical and it was a tremendous obstacle to overcome during the building of the railway.

If you research on the web or guidebooks before you go, you’ll get an alot of outdated, misinformation. This stems from the fact that the train used to depart from Riobamba for a much more grueling all day train. Tourists also used to ride on top of the cars, but since a 2006 fatalaty, roof rides are no longer allowed. A round trip train ride from Alausí is only 2.5 hours and that includes a 50 minute stop in the town of Pistishi for lunch. The train currently runs from Alausí 3 times a day (8A, 11A, 1PM) Tuesday-Sundays and the cost is $25 U.S. per adult. You can buy tickets at the ticket office in Alausí or at the old train station in Riobamba before you get there. Evidently weekends and holidays are pretty packed so you’re advised to get your tickets as early as possible. You can also call 1800 TRENES or (02)399-2100 ext. 1161 for more information. (BELOW IS A PHOTO ALBUM ON ALAUSI AND A VIDEO  ON THE DEVILS NOSE TRAIN EXPERIENCE, ENJOY) 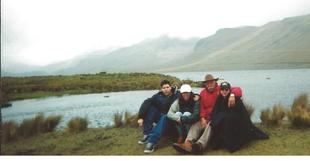 Lagos de Ozogoche with family, 2003
Carnaval, celebrated in late Februaury, is a traditional festival of Alausí, and is celebrated with a special parade, in which the neighborhoods of the city and special invitees participate. The origin of Carnival is from the Huarangas Indians (from the Chimbos nation). They celebrated the second moon of the year with a lively festivity, during which they threw flour, flowers and perfumed water. This  tradition merged with the Catholic belief of "carnaval" and resulted in a celebration without restraint all over the world, and Ecuador is not an exception. It is a time of masks, jokes, water, music and dances.  Another testament to the Spanish influence in South America, is the Festival of San Pedro, celebrated from June 22 - July 2, and has been celebrated since the colonial era. Traditional dance, music, folklore, bullfights and other activities attract Ecuadorians and international tourists to the weeks celebration.

The Festival of Lake Ozogoche in September. Beginning at the end of August and for all of September, thousands of migrating Plover birds leave their breeding habitat in the artic islands and coastal areas of Alaska and Canada to make the great journey south to Argentina and Chile. When they reach the Ozogoche Lakes, thousands of these Plover birds seemingly “commit suicide” by diving into the icy waters. To the Quichua people, this is a mysterious and sacred tribute, celebrated in traditional costume and folkloric dance. The Ozogoche Lake Complex consists of 45 separate lakes and lagoons located at 3,700 meters and surrounded by the snow-capped Andes mountains inside Sangay National Park. The Park Entrance fee of $2, for foreigners as well as Ecuadorian Nationals. 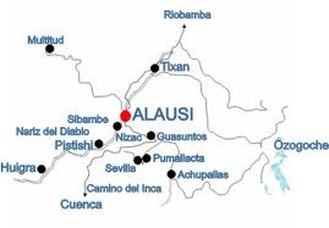 See map, where Alausi is in proximity to the lakes of Ozogoche, Cuenca, Inca trail, & the Devils Nose.

Chimborazo's elevation is is 6,310 meters above sea level, making itthe highest point on earth when measured from the center of the earth.

How to get there:  Take the Pan-American Highway south towards Riobamba to the Chimborazo cement factory. From there take the road towards the mountain that goes to the town of San Juan then the road known as "El Arenal". The drive is about 2.5 hours from the farm.

Chimborazo has two climber's  shelters. The first one, the Carrel Hut at 4,800 meters can be reached cy car, and the second, the Whymper Hut is at 5,000 meters. The entrance fee is $2 USD for nationals and 10 USD for foreign visitors.

It is recommended to bring appropriate clothing and footwear, as well as high-energy food like the local "panela" or brown sugar cake and pleanty of water. If you plan to climb the summit, an experienced guide is necessary. Info: Unidad de Turismo de Riobamba 593 32947389 or within Ecuador 03 294 7389.

The Inca trail starts in Chimborazo Province and ends in the Cañar province.  The ruins are about an hour and a half outside of Cañar. The Inca trail can be started from there or from Achupallas, 30 min. from Alausi. The elevation of the trail is at 3,000 meters and is anout 3-4 days duration. It is considered a moderate level intensity hike.

The Pyramid of Puñay was discovered in 2003 on the peak of a 3300m (10,826 feet) mountain in the Ecuadorian Andes near the border of Sangay National Park.


How to get there:

Visitors to the Ingapirca ruins (Kichwa: Inkapirka, "Inca wall") in Cañar can board a bus heading for Cuenca. Then take a private transportaion or taxi to the Achupallas community. It's possible to stay the night in a private home, hostel or camping just outside of Achupallas. From this point you can get an early start and cross the Andean mountain range to the ruins of Ingapirca.

Waterproof shoes/boots and clothing, camping equipment, provisions and a portable cooking unit are necessary. A first aid kit is also recommneded. A different access is also possible, from the community of Luvay, 45 minutes from Chunchi. Horses can also be rented from here.
Getting to our Farm:

Alausí  has a number of buses to many destinations in Ecuador. “CTA” Corporativa Transito Alausi leaves from major cities (Quito, Guayaquil, Riobamba etc.)  to Alausi and lets you off at the center of town on the main street, Avenida 5 de Junio. There you can inquire about fairs and details. Buses to and from smaller towns run regularly. There are set schedules for more popular  and major city destinations, such as Quito, Cuenca and Guayaquil.


Info. on choosing an international airport to fly into Ecuador:

Since February 2013, Quito's Mariscal Sucre International Airport (IUO) is now further distance from Quito proper (~18 kilometers (11 mi) east), in Oyamburo plain near the town of Tambaleda.  The estimated drive time from Quito's new airport is 4.5 - 5 hours, to Alausi. We recommend flying into Guayaquil's Jose Joaquin de Olmedo International Airport, (SEGU or GYE) for a shorter travel time and convenience 2.5 - 3 hours depending on how the roads are particularly in the rainy season.

From South Quito's bus terminal, you can take a bus to Riobamba (Alausi's closest Andean large city), or a bus directly to Alausí, this depends on preference, and bus schedules. Quito to Riobamba, is a four hour bus ride from Quito, or five hours from Quito to Alausi. The bus headed to Riobamaba will travel via Latacunga and Ambato before arriving. The bus will sometimes head onward to Alausi, (check schedules). The journey will cost is $5.00 USD Sometimes passengers will need to change buses in Riobamba to continue the on-bound journey to Alausí.

You can also hire a driver or taxi for ~ $100.00. Ask the driver, about the price, you can always negotiate.

You can also take a car or bus from Guayaquil, on the coast. The dive and ascent up to the Andes from Guayaquil, is beautiful.  The view is spectacular with all the changes in microclimates and natural beauty. I suggest hiring a car is best, as you arrive much quicker and it is safer than the Guayaquil bus terminals.